Isamu Noguchi was a Japanese-born American sculptor and designer; from 1942 to 1948, he also designed furniture and lamps that are now being manufactured by Vitra. 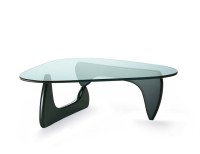 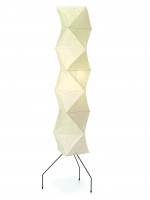 Isamu Noguchi (1904-1988) was a Japanese-American landscape architect, photographer, sculptor, set designer, and designer. His works were inspired by both Far Eastern and Western traditions. From 1923 to 1926, Isamu Noguchi studied at two universities, Columbia University and Leonardo da Vinci Art School; he then spent two years as a Guggenheim fellow and assistant to Paris-based artist Constantin Brâncuși. In 1929, Isamu Noguchi returned to the United States, where he conceived his first exhibition at New York's Eugene Schoen Gallery. From 1930, the artist made trips to the Far East, where he learned traditional drawing and pottery. From 1933 Noguchi planned public squares, including playgrounds; monuments and stage sets were added, followed by lamps and furniture from 1942. From 1949 he continued his education by traveling from Europe to Japan, where he established his own studio. In 1961 followed his studio in New York. In 1980 he established the "Isamu Noguchi Foundation", followed by the Isamu Noguchi Garden Museum in Long Island (New York) in 1985. From Noguchi's Japanese studio near Takamatsu another museum was established. In Kassel, Isamu Noguchi exhibited twice during the documenta in 1959 and 1964. Some of his work is also on display at the VitraHaus in Weil am Rhein.

Isamu Noguchi - The Journey into Light

"The magic of paper transforms cool electricity back into the eternal light of the sun": the work of Isamu Noguchi is extraordinary and complex. As a landscape architect, he left behind numerous gardens and sculptures; as a designer, he created lighting, furniture, and interiors. His work as a sculptor influenced the design language in the 1950s. In this decade Isamu Noguchi also designed his famous Japanese Akari Light Sculptures, "akari", means brightness, light and lightness. In total, Isamu Noguchi created over 100 models up to almost three meters in size, including table lamps, floor lamps and ceiling lamps, which are still lovingly handcrafted in the Ozeki manufactory - a traditional family business. Delicate bamboo rods are stretched onto the original molds, which are then covered with washi paper made from the bark of the mulberry tree. After the drying process, the wooden mold is removed and the light object is unfolded; a work that takes at least six hours, depending on the object. The logo of Akari Light Sculptures symbolizes the sun and the moon, guaranteeing the authenticity of Isamu Noguchi's design.