Ludwig Mies v. d. Rohe, a German-American architect with a significant influence on the style of modernity, developed the concept of "skin-and-bone" architecture, which provides the building construction of glass and steel support structures. 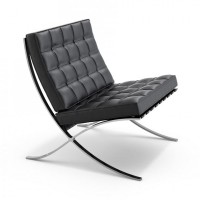 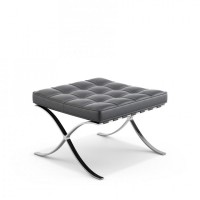 Minimalism is another feature of his art. Many of his works can be described with the statement "Less is more", including the simple designs of glass and steel. Through his innovative architecture Mies van der Rohe had a great influence on other architects of his time. His choice of material created great spatial freedom. The house should not be divided inside by many walls, the concept of an open floor plan was pursued: spaces can pass and flow into one another. The architecture, on the other hand, was innovative and remarkable and made him famous.

Life in Germany
Ludwig was born in 1886 in Aachen. At the age of 13 he took a position as an apprentice, but his drawing talent was quickly discovered when he became a draftsman for stucco ornaments. It was not long, then, that he left the profession and worked as a draftsman for the Aachen architect Albert Schneider. Already under his supervision Mies van der Rohe got to know many important people, who influenced his further career. In 1905, he left Aachen and his family and moved to Berlin to work for Bruno Paul. In addition to his work, he also attended his lectures at the Kunstgewerbeschule. A short time later, he became acquainted with the married couple Riehl. They wanted to build a new dwelling-house, and they were looking for a future stall that they could promote. The choice fell to Ludwig. In 1907, his first work was completed: the Haus Riehl was built in Babelsberg, whose style was based on the reform architecture. Inspired by his design and the personality of the young architect, a friendship between the couple and Ludwig emerged.. At just 21 years, he began a promising career with many good contacts.

On recommendations Mies van der Rohe moved to Peter Behrens. With him, he was able to dare major projects and develop his designer skills. He began to devote himself intensively and intellectually to architecture and it was not long before the second building, designed by him, was built: the neoclassical house of Perls (Berlin-Zehlendorf). At this time Walter Gropius works for him. In 1913 Ludwig received an invitation from The Hague, where he expected another commission for a building complex in a neoclassical style. Shortly afterwards he returned to Berlin and opened his first architectural office. Further orders followed.

At the first world war he was finally drafted in 1915 to serve in various construction companies. He was not conscripted in battles. In 1919 he returned to Berlin. Through the World War a cultural shock was triggered. A rewording of the architecture of the time was felt to be necessary. At this turn, Mies van der Rohe played a major role through his orientation to philosophical principles.

After the exclamation of the republic in Germany in November 1918, Ludwig joined the November group in 1921. He organized architectural contributions for four years, which were presented in art exhibitions. He also pursued the studies for a skyscraper of glas in these years. During this time Mies van der Rohe was very active: he took part in exhibitions, wrote articles for magazines and other publications and gave lectures. The New Objectivity, too, did not pass without trace. Works and designs of the coming years often possessed stylistic features of this epoch.

In addition to a three-year membership at the BDA (1923-1926), Mies van der Rohe also accepted an invitation to become a member of the German Werkbund. He joined in 1924, and two years later, he was appointed Vice-President. Finally, he meets Lilly Reich, an interior architect who was then the director of an exhibition in the city. Together they worked on the design of an exhibition area for the glass industry. This resulted in a professional as well as private close partnership. In 1928 they received the order for the design of a department of the upcoming World Exposition 1929 (Barcelona). Under their leadership, the important works of modern architecture, including the Barcelona Pavilion, were created. After the exhibition Mies van der Rohe devoted himself to the design of the house Tugendhat in Brno (Czech Republic). This house is the world cultural heritage of the United Nations today. He also designed a series of furniture adapted to the style of the created houses. For example, the cantilever, the Barcelona chair, the Brno chair and the rosewood lounger were created.

The world economic crisis in 1929 meant insecurity for Mies van der Rohe too. From 1930 he began an academic teaching activity at the Bauhaus Dessau, which was closed two years later by the National Socialist majority. Despite several attempts, Ludwig had to abandon the Bauhaus completely, since the style had sympathy with socialism and the government was no longer tolerated. He nevertheless showed opportunism towards the regime. He joined meetings and groupings, trying to keep his work going. In spite of his enterprises he was increasingly excluded. During the 1930s there were only a few papers that were comparatively conventional and reserved. The architecture has been restricted to politics and without alternatives. A new boom came with an invitation from the USA in 1936. Mies van der Rohe received two offers from Massachusetts and Chicago. In 1937 he traveled to the United States and took the offer from Chicago from the Armor Institute. He liked the boundless possibilities offered to him and the prospect of having his own office in Chicago. In 1944 he got American citizenship.

Life in the USA

His life in the USA began with the work at the Amour Institute, Chicago. The aim was to redesign the student's education and to replace the then teaching. In the end, she developed into the theoretical work on the craft and the planning. For this implementation he got the help of two former colleagues from the Bauhaus, Walter Peterhans and Ludwig Hilberseimer. In 1939, he founded his own architectural office in Chicago. Shortly afterwards, he was commissioned to plan and design a new campus. It was based on the development structure of Chicago. A series of rectangular, green and low-rise buildings with a visible steel support were created. Nine university buildings were also built outside the campus. In 1946, Ludwig got to know Herbert Greenwald, a project developer who wanted to realize apartment houses nationwide. There was cooperation. Philip Johnson, head of the Department of Architecture at the Museum of Modern Art in New York, dealt with the organization of a review of the works of Mies v. d. Raw. This became a worldwide success and contributed significantly to the architect's reputation, also sustainably. In 1951, Mies van der Rohe used a pure steel construction, whose facades were glazed. In the course of time, however, he changed his concept. The load-bearing posts were laid inwards and the facades were hung in front. His first building, known as a masterpiece in the USA, was the Farnsworth House, which he designed for a friend. There were other important commissions from all over the country and many should continue to be masterpieces. Particularly to Ludwig was the talent for the integration of the buildings into the urban situation.

In the 1960s, an offer from his home country came again for the first time: the task was to design the Berlin National Gallery in the Kulturforum near the Kemperplatz. Although Mies van der Rohe was getting worse and worse at the advanced age, and he was severely restricted by illness, he went on with the order intensively. Several times he went to Berlin to get a picture of the construction site. At the opening in 1968 he did not participate. His last years were drawn from honors and awards from the USA and Germany. At the age of 83 years, he died from a disease of esophageal cancer and an emerging pneumonia. Even after his death, he received honors in the form of renaming faculties and streets and rebuilding the Barcelona pavilion.

Ludwig Mies v. d. Rohe was an architect with timeless success. He has made a name for himself all over the world. In our shop you will find some of the furniture designed and developed by him.