Franco Albini was born near Milan in 1905 and was a successful architect and furniture designer from 1930 to 1960. He studied architecture at the Polytechnic in Milan until his diploma in 1929. 1930, after a short time working for Gio Ponti, he opened his own architectural office in Milan, where his son Marco also worked from 1965. 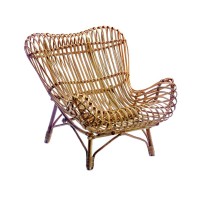 Albini's first years as an architect were characterized by the Italian Razionalismo with its high demand for abstraction, uniform geometry with a skeleton structure as a base with structured window divisions. Not only the architecture, but also the design is characterized by a certain rigor. Franco Albini had a central role in the movement of rationalism before the Second World War. Even in the post-war period, Franco Albini clearly set the new architect apart from the old one; he built museums and department stores which, despite their otherness, fit into the historical context. His works were characterized by warmth and respect for tradition. Albini also paid attention to the existing material language and the colours of the surroundings. In the post-war period, the affordability of materials and the modern modular principle were of great importance and also in Albini's focus.

Albini worked with well-known furniture manufacturers such as Cassina, Poggi and Knoll. In his studio he created numerous remarkable armchairs, tables, chairs, rocking chairs, sofas, shelves and desks. Many of his designs are still in production. He has received numerous awards, including the coveted Italian Compasso d'Oro prize three times.