Art was given to the designer Nicholai Wiig Hansen, born in 1981. His father was the world-famous painter and sculptor Svend Wiig Hansen, his mother a talented ceramist.

Art was given to the designer Nicholai Wiig Hansen, born in 1981. His father was the world-famous painter and sculptor Svend Wiig Hansen, his mother a talented ceramist. 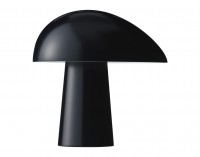 Nicholai Wiig Hansen is convinced that the function and material of a product should merge together with its aesthetics to form a higher unit, and that the visual effect of a product must not restrict its function in use.

Nicholai Wiig Hansen founded his own design studio, Wiig Hansen Design in Copenhagen in 2007 at the age of 26, together with Lars C. Pedersen. There he is inspired by everything that surrounds him, nature, art or machines. His designs stand for Scandinavian simplicity without details. There is only playfulness in his work if it serves a purpose.

In designing the Night Owl™, Nicholai Hansen worked with the function of light and an aesthetic balance of proportions. The name "Night Owl" results from his fascination with predators, which reveal their true nature only when they attack, i.e. when the lamp is switched on. The colours are inspired by nature: Midnight Blue, like the infinite sky, Smokey White, like the light of the full moon. The design of the lamp is informal and consists of a conical base with an oval shade, which together form a unit. Night Owl™ casts a soft and warm light down through the asymmetrical shade. The shade can take up four directions so that the cable can leave the lamp in the desired direction. The Night Owl™ invites you to place it on any piece of furniture, such as sideboard, shelf and bedside table or to place it in the window, at home or in the office.