The Italian artist Anna Castelli Ferrieri (1920 - 2006) was Art Director of Kartell. With the "Componibili" concept her work got famous around the world. 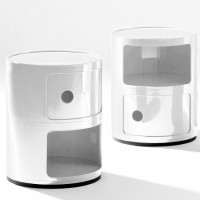 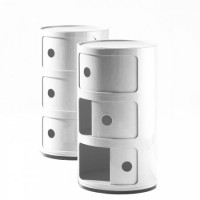 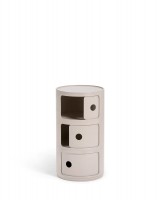 Anna Castelli Ferrieri was born in Milan in 1920. She was an Italian architect and chief designer at Kartell. Already at a young age she had contact with James Joyce, Thomas Mann and Luigi Pirandello. From 1938 to 1943 she studied architecture at the Milan Polytechnic. She found her teacher in the rationalist Franco Albini. Anna Castelli Ferrieri was one of the first female graduates at the Polytechnic.

In 1946 she founded her own office in Milan. As an architect she dealt a lot with urban planning, residential buildings, hospitals as well as churches and industrial buildings. Among her most important works in architecture are the factory and office buildings of Alfa Romeo and the headquarters of Kartell.

On the side, Anna Castelli Ferrieri was much involved with magazines. She was co-editor of the architectural magazine Casaballa-Costruzioni in Milan from 1946, and for five years was correspondent for Architectural Design magazine from London.

In 1949 her husband, Giulio Castelli, founded the furniture company Kartell. Kartell soon advanced to become one of the leading companies in the design and manufacture of plastic furniture. From 1976 to 1987 Anna Catelli Ferrieri was art director at Kartell. She became world famous with her design for the Componibili furniture. The clever storage furniture is versatile and flexible. Her other designs include various seating furniture, such as sofas, armchairs and other products.

Her other activities included her positions as a lecturer at the University of Milan from 1984 to 1986 and her lectureship at the Doms Academy of Design until 1992.

The designer received numerous awards for her works.