The designer and artist Harry Bertoia originally came from Italy, but moved to his brother in Detroit, Michigan at the young age of 15 years. He is famous for the Diamond Chair, which is still manufactured and sold by Knoll. 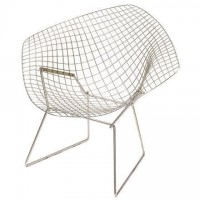 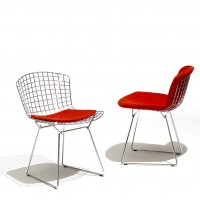 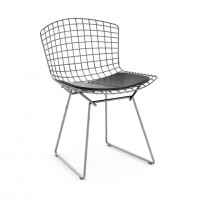 After Bertoia's early immigration to the States he took classes in art and design at Cass Technical High School. There he also learned the craft of the jeweler. In 1936 he studied at the Detroit Society of Arts and Crafts. With the scholarship he received in 1938, he moved to the Cranbrook Academy of Arts. There he met architects like Edmund Bacon, Walter Gropius and the designers Charles and Ray Eames.

In 1939, Harry opened his own workshop, where he taught metalwork and jewelry. He married Brigitta Valentiner and together they moved to California, where Bertoia worked for the Eames. The realization of his own studio happened 1950 in Pennsylvania. There he worked a lot for Hans Knoll and designed many designs for seating furniture. During this time, the world-famous Diamond Chair was created, which still stands as a sales success. On the basis of this breakthrough, Bertoia devoted himself only to the sculptural work and the sound sculptures he had designed. He was spared money because of his income. Many of his sound sculptures can be found in various American museums.

At the age of only 63, Harry Bertoia died in Barto, Pennsylvania. His wife survived him for almost 30 years and died in 2007. They had three children.

The world-famous Diamond Chair can be found in our shop alongside other works by Bertoia.