Before KiBiSi was founded in 2009, Lars Holme Larsen, Bjarke Ingels and Jens Martin Skibsted had already worked together for a number of years in a loose association. The merger of the three successful design and architecture offices, Kilo Design (Ki), BIG architects (Bi) and Skibsted Ideation (Si), took place in order to become even better together. The young trio merged to form a dynamic design office and is now considered a promising design team in Scandinavia. 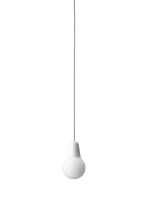 The preference for stringent solutions brought the three designers together and justified KiBiSi with the demand for serious and well thought-out products that clearly communicate their original idea. To achieve their unconventional solutions, the three designers often incorporate elements from other areas. With their knowledge of architecture, KiBiSi has used its expertise to design its first lamps for lightyears by Fritz Hansen. The designers' preference for the cinema influenced their choice of name, alluding to KiBiSi's favourite films - in fact, all Bulb Fiction™ !

Lars Holme Larsen is a graduate of the Royal Danish Academy of Fine Arts. In addition to his own design studio, he has been a member of the Danish Design Council. His work is on display in the permanent exhibition at the San Francisco Museum of Modern Art. Among his many awards and honours are the Danish Design Award, Red Dot, Good Design Award, IDEA Award and a gold trophy from the Cannes Lions.

Jens Martin Skibsted, born 1970, studied cinematography in Paris, where he graduated in 1994. He then studied philosophy at the University of Copenhagen with a bachelor's degree in 1998, followed by a degree in business administration at a Californian university in 2000. Skibsted is a partner in the Strategic Design Group and has co-founded or founded companies such as Biomega, Skibsted Ideation, Actics, and Ogojiii in addition to KiBiSi. Skibsted has won major international awards and published several books.