A popular Italian
Ferruccio Laviani is an Italian architect and designer. He focuses on the production of companies, industrial products and sales points. After breaking the doctrine of being a violinist, he went to Milan to attend the Polytechnic to study there. In 1986 Laviani received a diploma in architecture and design. Already three years before his graduation, he started to work for Michele d. Lucchi. With his diploma he became his partner. Five years later, he finally became self-employed.

His first great success came through the planning and design for appearance  of the company Kartell at the "Salone internazionale del mobile". Through his successful performance he was also engaged by Kartell in the coming years for shows and exhibitions. Since 1991 he has been the artistic director of Kartell. In 2000, Ferruccio developed the ceiling light "Fly". In 2015 the lamps "Battery" and "Kabuki" were published. The special thing about the "Battery" is that you can recharge it thanks to USB cable. 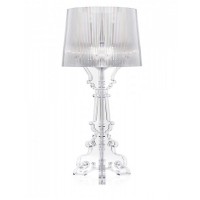