The Dutch designer Marcel Wanders was born in Boxtel, a city near Amsterdam. After completing his studies at the Kunstakademie in Arnhem in 1988, he worked as a freelance designer and founded his own design office in 1995. Wanders designs products for world-famous companies and thus also for Kartell.

Wanders has received numerous awards and design awards. In 2001, he was one of the nominees in the "designer of the year" category. His works are exhibited at the Museum of Modern Art New York. 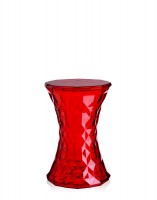