Bodil Kjær, born on 11 March 1932 in Hatting near Horsens, studied in Copenhagen at the School of Interior Design (graduated 1964) and then in London at the Royal College of Art and the Architectural Association School of Architecture (1965-1969). 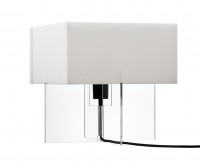 As an architect, furniture designer and scientist, she specializes in interior design and urban planning. Today she is best known for her flexible office furniture series, which she designed in the 1960s.

Some of Bodil Kjær's tables have made it into well-known cinema films, including James Bond films. The villain sits at the table and strokes a white cat on his lap, a short time later there are dead people. Bodil Kjær wanted to create furniture that makes life easier and is proportionate to the people. As a student she had already been infected by the American functionalism of the designer couple Ray and Charles Eames and was inspired by Bauhaus designers such as Mies van der Rohe and Marcel Breuer.

Kjær's furniture designs are mostly from 1959 to 1964, and the designer found the office furniture of this period awkward and constricting, so she designed her tables as part of a flexible work environment with recessed drawers and a range of storage options with adjustable shelves and drawers that could be placed under the table or next to a wall.

Today her originals are sold at high prices. One of her most popular designs is the Cross-Plex™ table lamp by Fritz Hansen, a lamp with a problem-solving design approach combined with minimalist design.

The Cross-Plex™ lamp by Bodil Kjær by Fritz Hansen

The Cross-Plex™ lamp from 1961 derives its name from a cross of moulded Plexiglas with characteristic straight lines, which makes the table lamp appear like a miniature building, with the shade shining like an illuminated roof. The base only leaves as much space as the cable actually needs.

Bodil Kjær worked as a senior architect at the London building consultancy firm Arup (1967-69), was a professor at the University of Maryland (1982-89) and had her own studios in Copenhagen (1960-65) and London (1969-79). Her work includes the development of furniture, lighting and glass for homes, factories, offices and universities. She worked with renowned architects and designers, such as the Danish architect Arne Jacobsen and the American designer Paul McCobb. Her research has focused on the future of our cities.